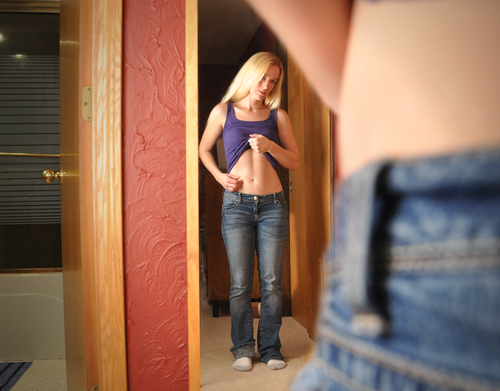 Anorexia nervosa is defined by the successful pursuit of thinness through dietary restriction and other measures that usually (but not always) results in lower than average body weight. Patients often report complex feelings and views about their symptoms; they can feel too fat but also feel pride about their thinness and restraint. They are also very fearful of gaining weight, yet over time nearly 50% of anorexia patients succumb to binge eating. Anorexia nervosa typically begins in early adolescence and mostly affects girls and women. The longer term semi-starvation often has predictable affects on mood, behavior, and physiology. These include but are not limited to depression, isolation, social withdrawal, preoccupation with food and cooking, altered hormone levels, amenorrhea, and lower metabolic rate (Hoek & van Hoeken, 2003). Anorexia nervosa is the most deathly of all mental illnesses, resulting in a 5-10% rate of death due to related causes. According to long-term studies, nearly 50% of patients make full recovery, 20-30% show some residual symptoms, and 10-20% remain severely ill (Steinhausen, 2002).

The best-studied treatment approach for anorexia is a specific form of family therapy called the Maudsley model. This intervention involves 10-20 family sessions over 6-12 months. Ideally, the whole family needs to be seen together for all sessions. In the first phase, parents are directed to take control over their child’s eating and weight and are taught effective means to do so. As the child starts to comply with parental authority, parents’ control is slowly faded. In the later stages, the adolescent gets back their age-appropriate authority if their eating disorder has been resolved (Lock, le Grange, Agras, & Dare, 2001).

Research on the Maudsley method has found that for younger patients with a more recent onset of symptoms, this method has produced impressive recovery rates that were maintained even 5 years later. Furthermore, the method was found to be far more effective than psychodynamically-oriented individual therapy. Unfortunately, patients with a later onset of symptoms or longer history of illness neither treatment proved to be beneficial (Eisler et al., 1997).

The most thoroughly studied treatment model for individual therapy for anorexia nervosa is cognitive-behavioral therapy.  CBT for anorexia is similar to CBT used for bulimia with some key differences: emphasis for anorexia being shaped by the importance of motivational issues, the effects/problems related to semi-starvation, and often the need for weight gain (Garner et al., 1997). It is also important to focus on enhancing patients’ motivation for change and engaging them as active collaborators (Vitousek, Watson, & Wilson, 1998).

Studies that compared nutritional counseling alone with CBT found that most patients assigned to only nutritional counseling drop out and refuse to participate in sessions, while those in the CBT group complete treatment (Serfaty, Turkington, Heap, Ledsham, & Jolley, 1999). Also, CBT patients were slower to relapse after treatment and achieved better outcomes overall (Pike, Walsh, Vitousek, Wilson, & Bauer, 2003). Other studies also reveal that the use of nutritional counseling or medication in the absence of psychotherapy is not recommended for anorexia patients (Wilson, Grilo, & Vitousek, 2007).

In the US today, about 50% of all anorexia patients end up hospitalized at least once during the course of their illness. Some of these admissions are necessitated by medical crises but often patients are hospitalized because outpatient therapy proves to be ineffective. Besides the incredibly high costs of inpatient treatment, there are many other reasons why this might not be the best option for many. The benefits of rapid weight gain in inpatient treatment must be balanced against the disadvantages of disrupted continuity of care, separation from one’s family and natural environment, and increased identification with the disorder (Gowers et al., 2000). Anorexia patients often experience residential treatment as demeaning; and often being exposed to other, more experienced patients can prompt patients to want to become the “best anorexic” in the unit (Colton & Pistrang, 2004).

In summary, most anorexia patients should be treated on an outpatient basis using CBT and family therapy. Hospitalization can be considered when there is substantial medical or suicide risk or after repeated failures of improvement despite going through evidence-based treatment modalities. Inpatient units need to provide structured regimens focused on refeeding and weight gain along with psychosocial interventions. If possible, residential treatment should occur near the patient’s home and community followed by at least 12 months of outpatient care (Wilson, Grilo, & Vitousek, 2007).

Unfortunately, research is still very limited for anorexia nervosa partly because many individuals with anorexia reject treatment completely or drop out too early and do not sustain behavioral changes unless they are “forced” to. We need to gain better understanding of the psychopathology of anorexia nervosa. What seems to be obvious is that patients’ attitudes about thinness and restraint are more important and more correct for them than recovery. Such strong overvalued ideas are at the core of why anorexia nervosa is the oldest eating disorder that remains incredibly resistant to a wide range of treatment interventions (Walsh, 2004).