The Impact of Social Media Use on Social Skills

Guide to Social Media Use on Social Skills

The Impact of Social Media Use on Social Skills

A large part of this generation’s social and emotional development is occurring while on the Internet and cell phones. All the time that children and teenagers spend on the web and more specifically social media sites, takes time away from face-to-face communication and in-person activities (Giedd, 2012).

According to a study, from 1997 to 2003, the amount of kids’ non-screen playtime decreased by 20%, while screen activities (TV, computer, videogames, etc.) increased (Hofferth, 2010). Children’s access to electronic devices has grown fivefold in two years (Common Sense Media, 2013) and they engage with screens almost all day long and in many different settings such as cars, restaurants, vacations, and even in the bedroom.

Social media sites provide children with the opportunity to stay connected to friends and family, make new friends, share pictures and exchange ideas. Children can also engage in their communities by raising money for charities, develop their creativity through sharing their art or music, and get to know others from diverse backgrounds through shared interests (Boyd, 2008). Social media sites also offer enhanced learning opportunities.

Some schools use blogs as teaching tools with the benefit of improving English skills, writing and creativity. Facebook and other similar sites allow students to gather outside of school and exchange ideas about assignments or collaborate on group projects (Borja, 2005).

Using social media can often become a risk for adolescents even more than adults realize.

Cyberbullying refers to using digital media to communicate false, embarrassing or hostile information about another person and it is the most common risk for all teens (Lenhart, 2007). Cyberbullying can happen to anyone and often causes psychological problems such as depression, anxiety, isolation and even suicide (Hinduja & Patchin, 2010).

20% of teens have sent or posted nude or semi-nude photos or videos of themselves online (National Campaign to Treat and Prevent Unplanned Pregnancy, 2008). This phenomenon is known as sexting. Many such images or videos get distributed rapidly online and can incur felony child pornography charges as well as school suspensions and emotional distress for the victims (Lenhart, 2009).

‘Facebook depression’ is a new term that refers to depression that develops as a result of children and teens spending a lot of time on social media sites and begin to experience depression as a result. When teens compare themselves to photos of others and the illusion of others’ better lives, they can experience decreased self-esteem and depression. Depression, in turn, puts these children at risk for social isolation and seeking help from risky online websites and blogs that may promote unhealthy coping mechanisms including substance use, unsafe sex, or self-destructive behaviors.

Many children and adolescents do not understand the fact that everything they do online leaves a ‘digital footprint’. This can hurt their future reputation, hurt their job or college application and follow them forever.

Social Media Use and Social Skills

When we engage in face-to-face communication, social information is conveyed by vocal and visual cues in the context of the situation. Non-verbal communication is an important part of communicating and it includes facial expressions, eye contact, tone of voice as well as posture, space between individuals, etc. (Knapp & Hall, 2010).

Understanding the non-verbal aspects of communication is crucial because social situations we need to modify our behavior in response to the reactions of others (Knapp & Hall, 2010). Our ability to process emotional cues is associated with personal, social and academic success (Knapp & Hall, 2010).

Moreover, children who understand emotional cues in social settings can develop superior social skills and more positive peer relationships (Blakemore, 2003). These non-verbal, affective cues are much stronger when it comes to communicating in person vs. digitally (Sherman, Michikyan, & Greenfeld, 2013). So when children use digital communication extensively, it can curtail the face-to-face experiences necessary for them to develop and master important social skills (Giedd, 2012).

The term ‘video deficit’ was created as a result of many studies that confirm that young children learn better from live interaction than from screens. In a 2003 study, both live and videotaped models performed a series of actions with rattles and stuffed animals in front of children. Although children imitated both the in-person and videotaped models, their imitation scores were significantly higher in the live condition. This difference in imitation is present until 30 months of age in most children (Hayne, Herbert, & Simcock, 2003). 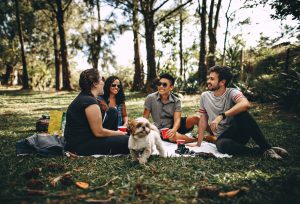 Furthermore, face-to-face communication (specifically eye contact and pointing) is crucial when teaching children about social interaction and the world around them. Children learn from cues such as pointing when interacting socially (Moore & Dunham, 1995). Many means of learning are really only available to children when they see a person’s face and physical being (Gross & Ballif, 1991). Children’s acquisition of skill in reading non-verbal cues also depends on in-person peer interactions, siblings when they are younger and friends and peers as they get older (Bosacki & Astington, 1999).

In a recent study, a group of children spent 5 days in a camp without access to any screen-based or electronic communication and being limited to only in-person interaction (a control group stayed at home with access to all electronic devices). It seemed that the time participants spent engaging with other children and adults face-to-face made an important difference.

The children’s in-person interaction improved significantly in terms of reading facial emotions, while the control group’s skills remained the same. The results suggest that digital screen time, even when used for social interaction, can reduce the time spent developing skills to read non-verbal cues of human emotion (Uhls et al., 2014).

If you’re interested in learning more about social media use, please feel free to read the second part of this series below: