Dietary Considerations in Treatment of ADHD 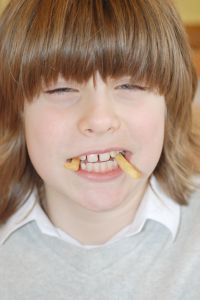 The expression “sugar rush” or “sugar high” has become very common and, although parents of children with ADHD frequently express concerns that sugar heightens hyperactive symptoms, the majority of controlled studies suggest that, in general, sugar does not produce significant adverse effects. Nonetheless, for a small group of children, sugar intake seems to increase inattention and duration of characteristic aggression. Thus, removing sugar from the child’s diet, cutting back on it, or reserving its place in the diet for special occasions is something parents might want to try, if their child’s hyperactive symptoms are problematic. This action is also likely to produce benefits completely unrelated to ADHD (e.g., prevention of tooth decay and obesity).

Millichap and Yee (2012) explain the relationship between sugar and ADHD, particularly the cognitive impairments and inattention symptoms, by referencing studies that show children’s vulnerability to present with reactive hypoglycemia. Low blood sugar levels (hypoglycemia) negatively influence electrical activity of the cerebral cortex by causing slow rhythms to appear. As with other attempts to link sugar intake and ADHD, this explanation only posits mixed results with possible benefits that still require additional studies.

Recently, studies looking into the role of trace elements have examined the relationship between zinc and ADHD. Bilici, Yildrim & Kandil (2004) report the following:

·        In some studies, zinc, as well as fatty acids, was found to be significantly deficient in subjects with ADHD, compared to controls.

This study, a DBRPC (double-blind, randomized, placebo-controlled) study of 72 girls and 328 boys conducted in the Department of Psychiatry of Karadeniz University in Turkey, tested the hypothesis that zinc administration (150 mg) would lead to significantly greater reduction in ADHD symptoms than would placebo, as determined by using the Attention Deficit Hyperactivity Disorder Scale (ADHDS). Their results were as follows:

·         Compared with placebo, zinc treatment produced sustained improvement from baseline in the outcome measures of the ADHDS scale scores.

·         Specifically, it showed improvement in hyperactivity, impulsivity, and socialization scores with no positive effect on attention deficiency scores.

Millichap and Yee (2012) report that, while zinc supplements can be of value in treatment of Middle Eastern children with ADHD associated with endemic zinc deficiency, the integration of zinc as part of ADHD treatment in the United States is still debated.

The alternative diet therapies for ADHD presented in the past two posts of this blog are just a few of the many that exist. The quest to find a substitute or supplement to pharmacological and behavioral treatments is still in the developmental stages and, unfortunately for anxious parents searching for solutions, no definite conclusions have been reached. Nonetheless, Millichap and Yee (2012), suggest that there are reasonable circumstances that might indicate trying out some of these diet therapies. They include, among others, the following:

·         need for substitution of an ADHD-free healthy diet for an ADHD-linked diet.

When evaluating these diets as potential options, it is important to do so with the help of a physician. It is also important to understand that some of these diets are harder to implement than others. For instance, elimination and additive-free diets are often disruptive to the household and complicated to follow, while supplemental diets are usually easier and less time-consuming to implement.

Do you or does someone close to you have ADHD? In your experience, what, if anything, has helped to reduce negative symptoms of ADHD? Are behavior therapy and medication the best options for treating ADHD? What do you think about alternative diet therapies for ADHD? Have you heard or read about others (besides the diets described in this and the previous post)?