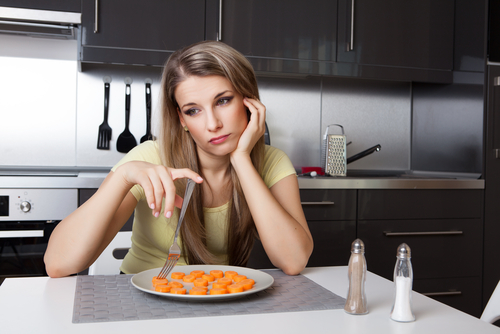 Bulimia nervosa is characterized by recurrent binge eating (uncontrolled consumption of large amounts of food), compensatory behaviors to control weight gain (vomiting, laxative abuse, over-exercising), and negative self-evaluation that is unduly determined by body shape and weight. Individuals with bulimia diet in a rigid and dysfunctional manner. Their body weight is usually normal or low, however, bulimia can also occur in overweight individuals. Bulimia is associated with other psychiatric problems such as depression, anxiety, and personality disorders as well as psychosocial impairment. It usually impacts younger women with a prevalence rate of 1-2% (Hoek & van Hoeken, 2003). Bulimia tends to have a chronic course, with frequent relapses (Ben-Tovim et al., 2001). Just like other eating disorders, it is unstable and can easily morph into other eating disorders (Milos et al., 2005).

The most common treatment method for bulimia is cognitive behavioral therapy. At the illness’ core is negative overconcern with body shape and weight that leads to extreme dieting and other unhealthy weight-control behaviors. Extreme dieting also predisposes the individual to binge eating. CBT treatment focuses on enhancing motivation to change, replacing dieting with regular and flexible patterns of eating, decreasing concern with weight and body shape and preventing relapse. Treatment is typically 16-20 sessions over the course of 4-5 months and can also be implemented in groups (Chen et al., 2003). CBT has been shown to be more acceptable and effective than antidepressant medication in eliminating binge eating. CBT typically eliminates binge eating and purging in 30-50% of all cases and it also reduced the level of other psychiatric symptoms as well as improves self-esteem and social functioning (Wilson, Fairburn, Agras, Walsh, & Kraemer, 2002).

Interpersonal psychotherapy was originally developed for depression but has been adapted to bulimia. The primary emphasis is on helping patients identify and change current interpersonal problems that could be maintaining the eating disorder. This treatment is non-directive, non-interpretive and does not focus on the eating disorder symptoms (Fairburn, Jones, Peveler, Hope, O’Connor, 1993).

Dialectical Behavior Therapy is a new treatment modality that has a lot of promise for bulimia nervosa. Elements of DBT such as training in mindfulness, distress tolerance, and emotion regulations are effective in treating high levels of negative affect that characterizes bulimia. Furthermore, borderline personality disorder is often co-morbid with bulimia and it also responds well to DBT (Fairburn et al., 2003). Another feature of this approach is balancing behavior change with the value of acceptance. Acceptance is important in overcoming dysfunctional concerns about weight and body shape (Delinsky & Wilson, 2006). Mindfulness training is also a distinctive strategy of DBT and consists of five skills: observing painful emotions without trying to eliminate them, describing a thought to not take it literally, being non-judgmental, staying in the present, and attending to one thing at a time (Linehan, 1993).

Binge eating is defined by recurrent binge eating episodes without the compensatory behaviors to control weight gain. Individuals with binge eating disorder also experience loss of control when they eat, overeat large quantities of food, and experience emotional distress as a result. Everyone overeats at times, but in order to be diagnosed with this disorder, one has to binge at least once a week for three months. Furthermore, these patients also experience higher levels of overvaluation of weight and body shape similarly to those struggling with bulimia (Hrabosky, Masheb, White, & Grilo, 2007). Binge eating disorder affects individuals at any age in adulthood and is not uncommon in men and people of color (Grilo, 2002). Binge eating generally starts earlier in adolescence but most individuals only seek help later in life compared to bulimia and anorexia patients (Grilo & Masheb, 2000). Binge eating is also associated with obesity as well as other psychiatric disorders (depression, anxiety, substance abuse, and personality disorders), low self-esteem, impulsivity, and medical issues (Johnson, Spitzer, & Williams, 2001).

The treatment of choice for binge eating is CBT. This treatment method is similar to the one used with bulimia with the recognition that the unhealthy and chaotic eating in binge-eating is much less restrictive than in bulimia and that obesity is a frequently co-occurring problem (Masheb & Grilo, 2006a). About 50% of patients experience remission from binge eating as well as improvements in depression and psychosocial functioning  (Grilo & Masheb, 2005).