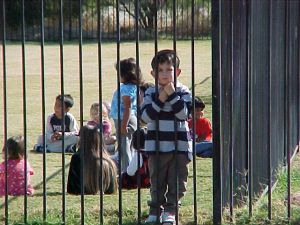 Several years ago, a team of researchers–Bacchini, Affuso, and Trotta—set out to examine three factors related to social likeability: Temperament, problem behavior associated with hyperactivity and inattention, and involvement in school bullying, i.e., as a bully or a victim. The study undertaken by Bacchini et al. (2008) aims to better understand how these three factors interact with one another and influence social preference and academic performance. The investigation tests the following model: “A child’s temperament influences adaptation to the demands of school, how success or failure in meeting these demands influences the risk of a child becoming a bully or a victim of bullying, and how involvement in school bullying influences social preference” (p. 447).

The study was conducted in Italy and drew participants (students, parents, and teachers) from three primary schools. Temperamental traits were measured by asking mothers to complete QUIT (Axia, 2002), the Italian questionnaire for temperament. The questionnaire measures three areas of temperament: Attention, inhibition to novelty (reactions to changes in environment), and negative emotionality. Symptoms of attention deficit hyperactivity disorder (ADHD) were measured with the SDHI (Cornoldi et al. 1996), which was administered to teachers. Students were then asked to nominate three bullies and three victims to screen for students’ perceptions of social preference. Similarly, children were also asked to list which students in the class they would prefer to be around and which they preferred not to be around.

The results of the analysis support the proposed hypothesis (Bacchini et al., 2008) that the temperamental characteristics outlined above are connected to ADHD symptoms and, further, that the symptoms thus influence peer relations and one’s susceptibility to bullying. The main component in the findings linking temperament to ADHD symptoms is inhibition to novelty. The researchers indicate that children with high inhibition to novelty are easily irritable, anxious, and physiologically affected when confronted with changes in the environment. High inhibition can potentially activate more frequently in school settings with constantly changing stimuli, thereby causing children with this difficulty more easily to appear inattentive and restless.

In accordance with previous research, data from the study by Bacchini et al. (2008) reflect that both bullying behavior and peer victimization are related to ADHD symptoms. ADHD symptoms include: Inattention, hyperactivity, aggression, oppositional behavior, and a struggle with regulation of emotions. These characteristics are intuitively connected to relational struggles and often perpetuate cycles of bullying behavior and social ostracism. Bacchini et al. highlight the varying outcomes associated with gender and note that ADHD symptoms in males are associated with bullying behavior; whereas ADHD symptoms in females increase the likelihood of peer victimization. ADHD symptoms should be viewed, according to Bacchini et al., as “… negative social catalysts that can amplify negative responses by parents, teachers, and peers” (p. 456). They highlight the fact that a child’s behavioral difficulties are typically consistently disruptive in the home, at school, and in peer relationships. The far reaching potential consequences of ADHD symptoms should be carefully researched and understood so as to maximize potential treatments and social interventions. Bacchini et al. (2008) suggest interventions that teach peers how to relate to children with ADHD symptoms to avoid aggressive reactions of inappropriate behaviors.