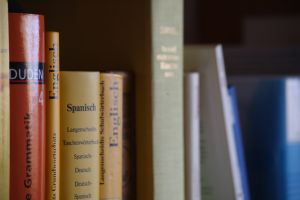 Hola, hablo Español and English too. With increasing numbers of people considering themselves bilingual or even multilingual, the scientific community has become increasingly interested in the cognitive consequences that speaking two or more languages can have. Concisely, bilingualism can be defined as the ability to speak two languages. Many of us have heard people around us say that once you can count, think, or dream in that second language that you can give yourself a pat on the back because you are bilingual. How might the brains of bilinguals differ from those speaking only one language?

A recent article in the New York Times had a lofty title, suggesting that bilinguals are smarter than people speaking only one language. Is this really the case? If so, how, or in what areas?

Moreover, in December (2011), The Canadian Journal of Experimental Psychology published an article that stressed the benefits of bilingualism. Apart from the evident advantages of being able to communicate in more than one language, the article presents substantial data regarding the positive effects that being bilingual offers. The article suggests that just as any other experience in life impacts our cognitive development, the intense and sustained experience of learning a new language and being bilingual will reshape our minds. This is particularly true when it comes to executive functioning and the executive control system involved in these functions, across the lifespan. The executive control system is involved in a wide array of cognitive activities, specifically those requiring effortful attention and selection. It is normally involved in situations where selection and conflict resolution are required.

The author states that the key to understanding how being bilingual affects our minds and brains is to acknowledge that both languages of a bilingual speaker are always active to some extent, even in strong monolingual contexts. This suggests that bilinguals are not necessarily focused on inhibiting one language in order to use the other. Instead, they keenly monitor the environment in order to select from two competing options the language that better suits the current situation. The competing options in both languages lead bilinguals, but not monolinguals, to recruit their executive control system to aid in linguistic processing.

Such studies suggest that because bilinguals are constantly using their executive control system to select the language they will use, they fortify and change the configuration of the executive control network. Over time, this leads to more efficient performance on executive control tasks, including those that are not verbal. In conclusion, it seems that being bilingual affords extra training for the brain regions in charge of executive functions, making them stronger and more effective. Executive functioning is crucial for attentional control, and has clinical implications for those with Attention-Deficit Hyperactivity Disorder (ADHD).

We can’t help but wonder how generalizable these conclusions are. For example, some of our questions on the matter are:

• How much experience with the second language does this take?

• Do third and fourth languages offer advantages over just a second language?

• Could learning a second language improve or prevent ADHD symptoms?

Let us know some of your question?