Some of the Benefits of Yoga 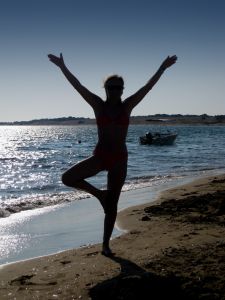 This is the first of two general discussions on this blog site regarding the benefits of yoga in mood related disorders. In recent years, the Journal of Alternative and Complementary Medicine has published research articles focusing on the connection between yoga and mood. According to information obtained from this article, researchers from Boston University School of Medicine (BUSM) found that yoga may in fact be superior to other forms of exercise (i.e., walking) when comparing its positive effects on mood and anxiety. Findings indicated that there is an association between yoga postures, increased GABA levels, and decreased anxiety.

GABA stands for gamma-aminobutyric acid, a chemical in the brain that helps regulate nerve activity. GABA is found to be reduced in people with mood and/or anxiety disorders. Treatment options for improving mood and decreasing levels of anxiety include medications that increase GABA activity in the brain.

Yoga as an Alternative Treatment for Mood and Anxiety Disorders

Researchers interested in the effects of practicing yoga designed studies aimed at determining if in fact yoga could be a possible alternative treatment option, in the long-run, for mood and/or anxiety disorders. They followed two randomized groups of healthy individuals. Participants in one group practiced yoga three times a week for one hour, while participants in the other group walked for the same period of time. The groups were followed for 12 weeks. The researchers used Magnetic Resonance Spectroscopic imaging (MRS) to scan participants’ brains before the study began, and they repeated the scan during the last week to compare the GABA levels before and after the 60-minute exercise session. In addition, throughout the study, each participant was also required to assess his/her own psychological state.

Self-Assessments of Participants’ Mood and Anxiety

Based on results obtained from participants’ self-reports on their own psychological assessment, those who practiced yoga for 12 weeks reported greater improvements in mood and decrease in anxiety compared to those who walked. In addition, researchers also found that mood improvement was also correlated with increase in GABA levels.

Researchers continue to direct their focus on the benefits of yoga, and these findings will be further investigated to determine what the long-term benefits of yoga may be in treating mood and/or anxiety disorders.