Mindfulness and Yoga for College Athletes 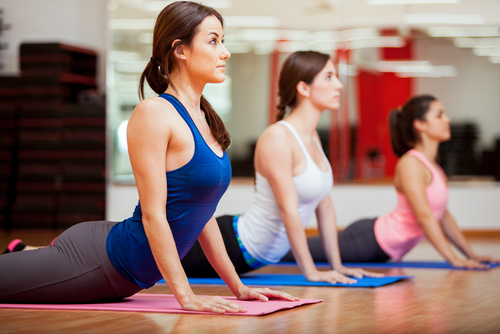 College student athletes are a unique group in terms of being at increased risk for emotional and behavioral difficulties (Proctor & Boan-Lenzo, 2010). Not only do college athletes have to juggle academic responsibilities, interpersonal relationships and athletic endeavors, they are also under pressure to present the idealized public image of a college student athlete (Parham, 1993). Studies show that student athletes, especially at highly competitive levels, tend to engage in riskier behaviors (such as binge drinking or drug use) than their non-athlete counterparts (O’Connor & Beck, 2006). Because stress unrelated to sports can have a significantly negative impact on student athletes’ performance, psychological interventions can be particularly useful for this group.

Traditional sports psychology, also known as psychological skills training, emphasizes the control of internal states (Whelan, Mahoney, & Meyers, 1991). Athletes learn how to control or reduce their negative emotions, thoughts and sensations in order to increase their potential for achieving an “ideal” mental state for optimal performance (Hardy, Jones, & Gould, 1996). The idea is that by reducing negative mental states, athletes can minimize distractions and create opportunities for positive experiences and confidence building. However, trying to control or altogether suppress negative experiences may actually be counterproductive for improving performance. Avoiding unpleasant experiences may provide temporary relief from distress, but when it is done consistently, it can create a rebound effect and increase these unwanted states (Marx & Sloan, 2005). When such ineffective and dysfunctional strategies are used often, one’s cognitive resources can get depleted, which in turn can prevent one from adapting to situational demands and promotes a rigid mindset also known as psychological inflexibility. Psychological inflexibility can lead to a variety of mental health problems, may hinder the pursuit of meaningful and value-based behaviors (Hayes, Strosahl, & Wilson, 1999) and may even be detrimental to athletic performance.

A recent study (Goodman, Kashdan, Mallard, & Schuman, 2014) has investigated the effectiveness and efficacy of a different kind of intervention, namely a comprehensive mindfulness program called Mindfulness-Acceptance-Commitment (MAC). The MAC program was originally developed by Gardner and Moore (2007) specifically for student athletes and it teaches athletes ways to be more mindful and accepting of negative thoughts and emotions, as well as identifying values and committing to behaviors that are in line with those values. The current study changed the original MAC program by condensing its 8-week protocol into 5 weeks (keeping the number of total sessions the same) and adding an hour-long yoga session each week to incorporate more physical movement into the program. Yoga was also added due to its central message of learning how to listen and respond to bodily sensations and learning mindfulness through increasing one’s awareness of their physical and mental states while performing certain movements and poses (Shiffman, 1996). Moreover, regular yoga practice has been associated with more positive emotions, fewer negative emotions, and increased satisfaction with life (Impett, Daubenmier, & Hirschman, 2006) in addition to reduced levels of depression and anxiety (Pilkington, Kirkwood, Rampes, & Richardson, 2005).

The intervention consisted of 8 sessions as outlined below:

• Explanation of the fundamental concepts of mindfulness and practicing mindful breathing

• One goal of mindfulness is to create cognitive defusion, which is a state of mind characterized by psychological distance from subjective experiences (Blackledge, 2007). This mental state allows one to perceive thoughts and feelings as fleeting mental events instead of facts of reality.

Session 4 – Costs of avoidance and benefits of acceptance

• Experiential avoidance is one’s attempt to control or eliminate unwanted, negative thoughts and feelings, while experiential acceptance is the willingness to tolerate those experiences in order to stay aligned with one’s values and goals

• Exercises to learn how to redirect attention from internal processed to an external task (e.g.: if one was avoiding lifting weights, creating a plan to life even more weights by focusing attention on the task instead of negative emotions)

• Setting performance goals and action plans to achieve them

Yoga after each session

Following the intervention, the members of the athletic team reported greater mindfulness, greater goal-directed energy and less perceived stress than before the intervention. They also reported greater tolerance of negative experiences (i.e.: greater comfort with disgust and anxiety). Several players expressed that mindfulness exercises were the most useful part of the intervention. Through mindfulness participants learned to allow their experiences to occur without judgment and accept them as they naturally unfold. They learned to cultivate an open and receptive attitude that promotes the acceptance of negative states (Kabat-Zinn, 1990). Such openness is important for athletes as it helps them navigate the fluctuating demands of the competitive sporting environment. The reported lower levels of perceived stress is also crucial as it might equip athletes with an increased ability to cope with negative events. Participants also reported increased levels of importance of valued life domains. Since college athletes have only a finite amount of resources to devote to multiple competing life domains, it may be helpful to clarify and identify the ones that are the most personally meaningful. Then they can develop goals and channel more energy into the life domains that they value the most.