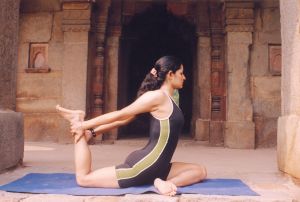 Reaching a Flow State of Mind

Last week’s blog entry (posted Jan 17, 2013) focused on two very different states of mind (flow and choking) that are possible during athletic performance and outlined some of their characteristics. Flow was described as “an almost automatic effortless yet highly focused state of consciousness” (Csikszentmihalvi, 1996, p. 110). In light of the spotlight leveled on one of the world’s most noted and most highly-skilled athletes (Lance Armstrong) over the past few weeks, it might prove helpful to delve a little deeper into what could help an athlete attain the flow state and/or prevent the experience of choking during competition (without performance-enhancing substances, of course). In that vein, Moran (2012) poses the following question: Given the characteristics of flow, could an attentional training strategy be used to facilitate the experience of this phenomenon in skilled performers?

In order to provide preliminary answers to this fascinating question, Moran examined the results of a study in which mindfulness training with athletes was used as a possibility to enhance attentional training. Mindfulness, as Jon Kabat-Zinn (2005) describes in his book Coming to Our Senses, can be thought of as “an openhearted, moment to moment, non-judgmental awareness.” Studying the evidence that has been quickly accumulating–which suggests that mindfulness-based interventions are effective in reducing stress and in improving cognitive abilities such as attention, one cannot help but wonder if mindfulness training could increase the likelihood of athletes experiencing that flow state of mind?

Mindfulness training focuses on helping athletes concentrate on the here-and-now and stresses the importance of acceptance rather than attempted rejection of intrusive and unwanted thoughts and feelings. Moran (2012) summarizes a study featuring a CD-based mindfulness training protocol that included somatic awareness activities involving breath control and yoga. The study lasted for six weeks, after which the effects of the exercises on the athletes’ flow experiences in training were assessed. The results show that athletes who were part of the experimental group and received the mindfulness training reported an increase in their global flow experience. However, these results are only exploratory and further research with a larger sample and more stringent control is necessary before strongly supported conclusions can be drawn.

After considering the importance of reaching a flow mind state for an athlete, do you think it is something on which all athletes should focus? Can mindfulness training really help elite athletes win their competitions by allowing them to have more of that coveted flow experience? Have you ever used yoga, breathing exercises, or similar strategies to prepare for a performance (whether or not it was a competition)? If so, what was the training strategy, and do you feel it helped you? Would you consider incorporating some kind of mindfulness activity into an upcoming athletic event in which you plan to participate? How about a non-athletic performance (e.g., piano recital, academic presentation, or solo concert)? Do you think mindfulness training might be beneficial in preparing for events such as these?

Moran, A. (2012). Thinking in action: Some insights from cognitive sport psychology. Thinking Skills and Creativity, 7, 85-92.