Impact of Daily Exercise on Development of Alzheimer’s Disease 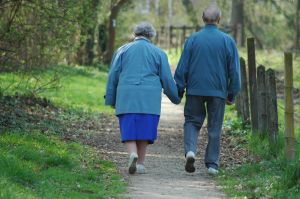 Can Exercise Ward Off or Delay Alzheimer’s?

According to research, a healthful food diet can lead to a healthy brain and ultimately have an effect on the development of Alzheimer’s disease. What about a daily exercise routine? Can you “workout” your way to a healthy brain? A recent New York Times article summarized a research study that focused on the relationship between daily exercise and the development of Alzheimer’s disease.

Based on information obtained from The Archives of Neurology, researchers at Washington University collected data from a sample of 201 adults between the ages of 45 and 88. These participants were part of a study at the University’s Knight Alzheimer’s Disease Research Center, and, while they presented no clinical symptoms of the disease, they had a family history of Alzheimer’s.

The scientists at Washington University looked for signs of amyloid plaques (deposits that are a hallmark of the disease) in participants’ brains. This was done with the use of positron emission tomography, an advanced scanning technique. Why was this procedure important at the beginning of the experiment? Well, according to researchers, more memory loss is associated with more plaque.

The next step was to examine a particular gene variation of APOE, known as e4, which is involved in cholesterol metabolism. Scientists explain that, while everyone carries the APOE gene, the particular variation of the gene e4 has been found to be associated with the development of Alzheimer’s disease, and, in fact, individuals who carry this variation of the gene are 15 times more at risk of Alzheimer’s than those who don’t. Moreover, out of the 201 participants in this study, 56 turned out positive for APOE-e4.

The goal of this study was to examine the relationship between exercise and Alzheimer’s disease and potentially to identify effects, if any, of exercise on the development of Alzheimer’s. The researchers suggest that “a daily walk or jog could alter the risk of developing Alzheimer’s or change the course of the disease if it begins.” Hence, the next step was for participants to complete questionnaires regarding their exercise habits over the past 10 years.

Following is a list of results reported by the investigators and their recommendation.

·         Participants who reported walking or jogging for 30 minutes a day for 5 days a week had fewer amyloid plaques;

·         Carriers of the APOE-e4 gene (showing higher amyloid plaques) who reported exercising daily decreased their inherited risk for developing the disease (over carriers who did not exercise);

·         “activity levels may have an impact on plaque accumulation;”

·         In participants who followed an inactive lifestyle, there was an increase in the accumulation of amyloid plaques.

The findings suggest that daily walking, jogging, or other forms of exercise could lower an individual’s risk of developing Alzheimer’s disease, even if he/she is a carrier of the APOE-e4 gene variation and shows more plaque (known to be associated with memory loss). Further, it appears that a non-carrier can increase his/her risk of developing Alzheimer’s by following an inactive lifestyle. Conversely, it is quite possible that the non-carrier may decrease this risk by adhering to a daily exercise regimen). More research on these topics needs to be conducted to enhance our understanding of the effects of exercise on this disease.