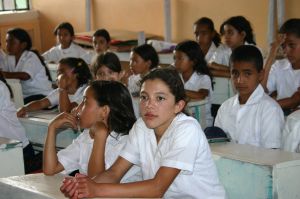 In an attempt to better understand the effectiveness of empathy training as an intervention to bullying behaviors, Sahin (2012) designed an experimental study. Empathy has historically been understood as both (1) a cognitive function that allows an individual to be aware of another’s thoughts and feelings and (2) an affective reaction, or an ability to understand another’s feelings (Bernadett-Shapiro, Efrensaft, & Shapiro, 1996; Feshbach & Roe, 1968; Merrabian & Epstein, 1972). Sahin (2012) used this two-part interpretation of empathy in the creation and implementation of an empathy training program, which was prepared using research conducted by Ozbay and Sahin (2004) on the acquisition of empathetic skills in the therapeutic setting. The empathy training program was tested on an experimental group of children identified as bullies, to determine if empathic skills can be learned and employed to improve behavior.

Participants were selected for the experimental group, based on their answers to the Scale of Identifying Bullying/Child Form (Piskin & Ayas, 2007), administered to the population of sixth graders in Trabzon, Turkey. The control group was comprised of a random selection of students, not identified as bullies. Experimental group participants were also asked to complete Yilmaz-Yuksel’s Empathy Index for Children (2003) and proceeded from there to complete an eleven-session empathy training program. The program consisted of varying activities, interactions, and lectures, all aimed at assisting participants in identifying and relating to different emotional experiences. Homework was assigned to encourage students to actively think about and engage in emotional recognition during their everyday lives.

Changes in Empathy Level and Behavior

The results of the experiment indicated that the empathic education program was effective in reducing bullying behaviors in the sixth grade population that comprised the study (Sahin, 2012). Among students in the experimental group, bullying behaviors were decreased immediately following the experiment as well as in a 60-day follow-up study. In addition to demonstrated behavioral changes on the part of these students, there were also higher levels of empathy reported after the program. Successful empathic skill-building programs have several implications for mental health outcomes. Sahin (2012) cited studies that indicate children with high empathic skills had lower anger levels and incidents of physical and verbal violence (Robert & Strayer, 2004). Further, Sahin (2007) noted in a previous study that empathic training developed children’s empathic skills and increased self-esteem. Further investigation into the efficacy of empathy training programs in the treatment of bullying should be a priority for researchers, clinicians, and program administrators as an intervention with cascading benefits to multiple layers of a child’s development.

Sahin, M. (2012). An investigation into the efficiency of empathy training program on preventing bullying in primary schools. Children and Youth Services Review, 34, 1325-1330.